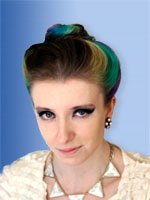 Constanze began life in the beautiful market town of Chesterfield before reading physics at Oxford University. She joined Sandafayre as a philatelic describer in 2012 moving to Grosvenor in March 2014.