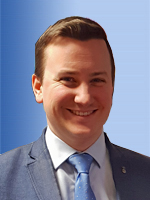 Andrew was recruited to the Grosvenor team in 2009 initially for his expertise in information technology and publishing. Since then he developed a strong, diverse knowledge of many philatelic areas, his personal collections including the challenging territories of Moldavia & Walachia, Serbia and Montenegro, as well as studies of the fakes and forgeries of the world. Andy is the latest recruit to the B.P.A. expertising committee and also takes an active role in the stamp trade as a member of the council of the P.T.S.

Andrew lives with his partner and two daughters. His many outside interests include rugby, fencing and the history and coinage of Imperial Rome.