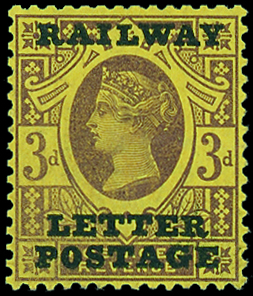 The railways of the past continue to inspire romance and those dreams have perhaps only been further encouraged by the recent restrictions on movement. Featuring strongly in the Great Britain auction on April 28-29 the Railway Stamps & Covers collection formed by the late Stuart Phillips attracted strong bidding.

A powerful symbol of this enthusiasm proved to the 1890 Railway Letter Postage essay overprint on the Jubilee 3d. [lot 28] which soared to £4,800. Featured on the front cover of the memorable sale catalogue was the remarkable Midland Railway cover sent on the day preceding official issue of the stamps [lot 227] achieved £2,280, whilst a ‘second day’ cover from the London & South Western Railway [lot 163] reached £1,320.

Prices for basic stamps remain steady and encouraging realisations that caught the eye in this gruelling two-day auction included the £3,968 paid for a fine mint example of the Office of Works 10d. [lot 1011], and £4,560 for the strip of five of the unusual Jersey World War II ‘swastika’ essay [lot 1473].

Modern commemorative errors are not currently at their highest levels but collecting of the Machin issues continues strongly despite the daunting complexity of the field. The 19p. colour trial for the 1900 ‘double head’ issue [lot 1294] surprised, soaring to £4,608. Rarity often trumps all and ownership of a unique item is a great prize. No other examples of the type 6C Walsall 4 x 41p. decimal Machin booklet with phosphor omitted [lot 1397] are recorded and its £8,352 price on this day may prove a shrewd investment.

Sale day attendance was necessarily limited but online participation continues to grow with noticeable effect. The auction once again left its pre-sale upper estimate far behind, reaching a final sale total of £752,104.

Full listings of the prices realised from this sale may be downloaded. Contact Tom Margalski for further information.