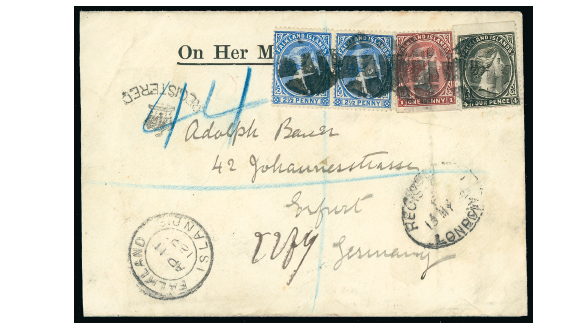 With philatelic exhibitions and social events largely postponed during the current restrictions, public auctions have provided a welcome opportunity for enthusiasts to add to their collections and dealers to refresh their stocks.  The two-day sale of British Empire & Foreign Countries held at Grosvenor on September 22-23 showed clear evidence of this as bidders forced prices far beyond the pre-sale estimate to a final total of £898,966.

The sale featured the largest and most important offering of Falkland Islands, Antarctica and South Atlantic Islands at public auction for many years, the sale catalogue an important work of reference for specialist collectors.  Contributions included rare postal history and covers from the collection of Ralph Riddell-Carre, together with the exceptional collections formed by the late Peter Cottis, however the top price in this half of the sale was achieved by a single stamp – the famous Falkland Islands 1964 HMS Glasgow error [lot 172].  This charismatic item achieved £28,520.

This was an unusual day when prices achieved for the islands’ stamps caught the eye, more than those achieved by covers, although for these there were also some notable results.  The early ‘cork’ cancellations continue as a highly popular collecting area.  The exceptional O.H.M.S. envelope registered to Germany in 1892 at 10d. rate with ‘large block pad’ cancellations [lot 354] rose to an impressive £6,820.

Antarctica continues to be ‘hot’, this due to the inspiring adventures of the early explorers rather than climate change.  Some dramatic prices were noted including the £7,688 paid for the attractive picture postcard sent by botanist Carl Skottsberg during the 1901-04 Swedish Expedition [lot 614] and £7, 192 for a rare card sent by ornithologist Brian Roberts [lot 625] from the 1934-37 British Graham Land Expedition, only around six items of similar outgoing mail having been recorded.

Saint Helena and the other Atlantic islands remain firm.  A most striking cover sent in 1866 to Pennsylvania at the rare 1s.8d. packet rate during the visit of the U.S. Steamer “Juniata” [lot 705] rose to £2,040.  A particularly handsome strike of the first type Tristan da Cunha cachet on a 1909 cover to England [lot 786] reached £2,340.

One benefit of additional time spent at home or in stockrooms is that collectors and dealers are keener than ever to buy larger country lots and whole collections.  It was then not surprising, though highly gratifying, that the interest shown in two remarkable New Imperial albums containing mint early to middle period British Empire countries [lots 799, 800] was translated into an excellent combined sale price of £62,000.

Bidding at this auction came strongly from all sides, a growing number of online live bidders finding themselves often in direct competition with those who were keen to attend the auction in person despite the necessary restrictions.  This was a memorable sale and a reminder of the continuing importance of collecting and research as a comfort to the mind in troubled times.

Full listings of the prices realised may be downloaded from the Grosvenor website www.grosvenorauctions.com.  Contact Tom Margalski for further information.