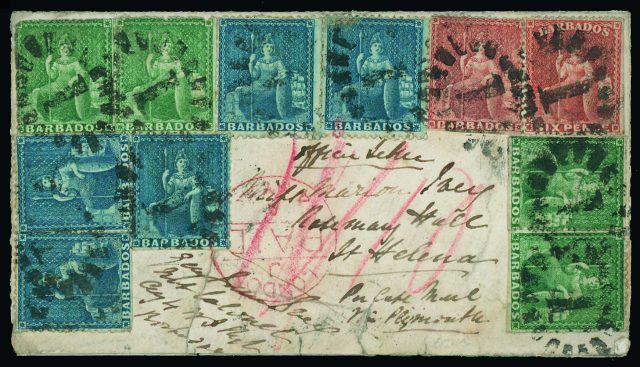 The British Empire & Foreign Countries auction held at Grosvenor on October 4th/5th was a festive celebration of stamps and covers from around the world. The final sale total of £759,925 greatly exceeded the pre-sale estimate.

Kicking off this feast of diversity was the first part of the remarkable Stefan Heijtz collection of the postal history of Barbados. The £7,200 paid for the earliest known letter from the island in 1656 [lot 1] was impressive enough but duly exceeded by the £8,060 price for the earliest known use of Barbados stamps on cover in 1852 [lot 64] and shortly afterward by the stunning multiple franking on the 1869 cover to Saint Helena [lot 68] which soared to a fantastic £27,280 – a new world record for a Barbados cover.

No time to rest on laurels, however, as there was still time on the first morning to present the fine collection of British East Africa formed by the late, and much lamented, Jonathan Smalley, former Chairman of the East Africa Study Circle. Among many memorable prices in this section were the £4,800 achieved by the striking K.U.T. 1938-54 3s. strip of five including the ‘damage on mountain’ variety [lot 225], from the 1895 Mombasa Provisionals, £5,760 for the used example of the “1 anna” on 3a., with “T.E.C.R.” initials [S.G. 32, lot 160] and £2,604 for the 1897 cover sent from Uganda by missionary Edith Markham Furley [lot 283] franked by Reverend Rowling’s 1a. with “L” handstamp (S.G. 70).

Consuming the whole afternoon of the first day was a further specialised offering of Falkland Islands & Antarctica that experienced a more mixed set of results than expected.  Notable results included £1,116 paid for the historic letter sent from Stanley by Governor Allardyce shortly before the decisive naval Battle of the Falklands [lot 563], whilst a Centenary 10s. on cover from Fox Bay [lot 536] reached £1,984 and, from the exceptional collection of War Stamps formed by Kim Stuckey, £1,860 was achieved by a block of four of the 1d. vermilion from the fourth overprinting including not just the “-” for “P” with broken “M” variety but with all showing overprints misplaced horizontally [lot 408].

The second day was a rollercoaster, commencing with a strong section of Miscellaneous & Mixed lots followed by a round-the-world trip which saw the 1838 Sydney Local Post letter sheet, an early example of the first use of pre-stamped postal stationery [lot 942] reaching £4,712. The rare high value, Ceylon’s 1912 1,000r. purple on red overprinted “SPECIMEN”, achieved £1,176 [S.G. 323s, lot 1114].

Full listings of the prices realised from these sales may be downloaded from the Grosvenor website www.grosvenorauctions.com. For further information contact Tom Margalski.