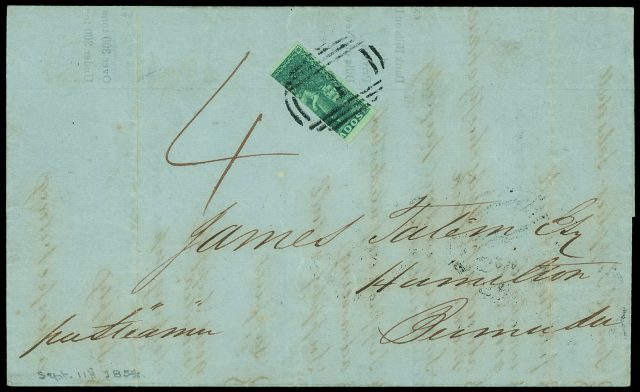 A warm summer’s breeze was blowing through the Strand on June 16 as the British Empire & Foreign Countries auction, in relaxed mood, reached the fine sale total of £312,228.

This auction provided items of a broad range of interest for collectors, even if many of the highest prices were achieved by collections on the day.  Bidders from around the world came together, inspired partly by a shared sense that stamp prices are once again on the rise and yet still far from a peak.

Small sections devoted to two countries stood out particularly in this sale and realisations in both cases were strong if rarely surprising.  The first was Barbados, from which a fine unused pair 1858 no watermark 6d. deep rose-red [lot 197] achieved a solid £1,037 result.  The chosen front cover item for the sale catalogue was the 1854 prices current bearing a vertical bisect of the 1852-55 (2d.) greyish slate [lot 186], an item of exceptional quality, that merited fully its £6,600 realisation.

Also well represented was Fiji with a small group of the classic ‘Fiji Times Express’ issues.  A mint example of the 9d. black on rose on laid bâtonné paper [lot 438] reached £1,612, around 50% of its Stanley Gibbons value.

One particularly handsome item was the unmounted mint plate block of the Trinidad & Tobago 1913-23 £1 grey-green and carmine [lot 873], rare now in such fine condition, which caught the eye at £868.

Full listings of the prices realised from this sale may be downloaded here.  For further information contact Tom Margalski.