CINDERELLAS HAVING A BALL 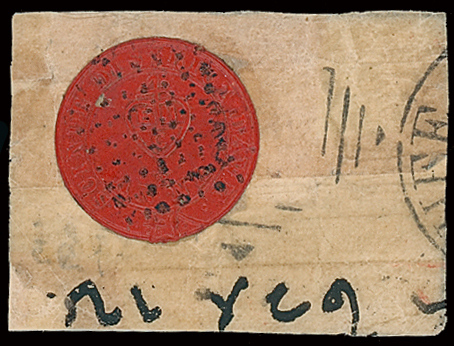 The British Empire & Foreign Countries auction held at Grosvenor on March 1st-2nd romped far beyond its pre-sale estimate to reach a final total of £824,664. Auctioneers James Grist, Constanze Dennis and David Bird were pleased to bring down the gavel in shifts as pre-sale bidding continued to be challenged by enthusiastic online participation throughout.

Attracting much attention, the Don Avery Collection of Cinderellas & Local Stamps generated some fascinating results, a great deal of the material being little known to most collectors.

The handsome example of the  Lake Lefroy Cycle Mail 6d. [lot 498], produced in 1897 to pay for mail to and from the Western Australian goldfields and featured on the front cover of the sale catalogue, reached a pleasing £2,640. The  strip of three of the 1894 Reuters Telegraph Service for Matabeleland [lot 613] achieved £1,560 and the 1918 Aleppo Provisional seal-type handstamp from the early administration of Emir Faisal [lot 650] rose proudly to £2,280. A collection of stamps and covers from the Japanese World War II prisoner of war camp at Bando [lot 581], items rarely seen in London, soared to £3,600.

The specialised offering of Falkland Islands & Antarctica included the exceptional ‘Deanery’ collection with many items of cross-over interest to collectors of both areas. From South Georgia the 1911 provisional small imprint featured four times on the attractive three colour franking envelope registered to Buenos Aires [lot 264] and sent by Richard Vahsel, captain of the ship Deutschland that was carrying the German Antarctic Expedition. This historic item was bid well to £5,760.

Popular also was the real photographic postcard showing members of the British Graham Land Expedition, Maxime Lester and Thomas Bagshawe with magistrate Arthur Bennett and captains Hansen and Anderson together in front of the shack in which Lester and Bagshawe had overwintered. The card [lot 327] was produced by Bennett and sent to his son in Stanley franked by a Falklands 1d. cancelled by a fine strike of the Deception Island oval datestamp, a unique item that merited fully its £5,400 realisation.

This auction will also be remembered for a fine presentation of early Chile which generated strong interest, the top realisation being the £3,600 paid for an unusual study of the 1853 Perkins Bacon 10c. [lot 967].

A further teasing offering of Gibraltar and Morocco Agencies, reminded us of the extraordinary depth of the wonderful Moore & Moore collection. Included was a merchant’s envelope sent from Rabat in 1889 bearing a Gibraltar 10c. pair and diagonally bisected single [lot 1527], this being the earliest recorded date for a Gibraltar bisected stamp, which moved to a new home for a price of £434.

Amongst many other individual results that surprised and pleased over this two day auction were the £22,200 paid for an attractive example of the classic 1852 ‘Scinde Dawk’ ½a. scarlet [lot 1262], this despite a tiny fault and being affixed to a piece that was not original. Conversely, the handsome 21 Kenya & Uganda values to £50 overprinted SPECIMEN were from the original 1922 issue only, but did not disappoint at a price of £4,340.

Full listings of the prices realised from these sales may be downloaded from the Grosvenor website www.grosvenorauctions.com. For further information contact Tom Margalski.