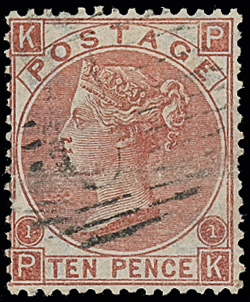 The stamps and stationery of the Oxford and Cambridge Colleges are a sideline often ignored by collectors but many are drawn to their particular charm, their restricted period of use resulting in many genuine rarities. A section of lots, rarely offered and largely comprising items from the Donald Avery collection, was strong and popular throughout. Having caught the eye on the front of the sale catalogue, the Exeter College cover bearing the 1882 (½d.) salmon-red [lot 100] moved on for £744.

Another rarity, although today a little grubby and stained, was the also short-lived World War I Knockaloe Camp P.O.W. label used on cover [lot 1451] excelled at a price of £4,340.

Of interest to both GB and British Commonwealth collectors, the star of the sale was the 1865-67 10d. red-brown watermark emblems error used in Constantinople [lot 600]. This extremely rare stamp is one of only fourteen recorded surviving examples, nine of which were used from the British Post Office in the Ottoman capital, and it duly powered itself to a £37,200 realisation.

The Machins market continues onward, though not excelling, and these are not the best of times for Queen Elizabeth II errors and varieties. Some found new homes at decent prices: the 1961 P.O.S.B. 2½d. (Timson) strip of ten with complete or partial omission of black printing [lot 1072] reached £18,600, the unique example of the 1972 Christmas 3p. with lavender (background) omitted [lot 1349] £12,960. The 1967 Paintings 4d. strip of four with one stamp showing new blue omitted [lot 1090], just five examples of this variety being known, achieved £6,200.