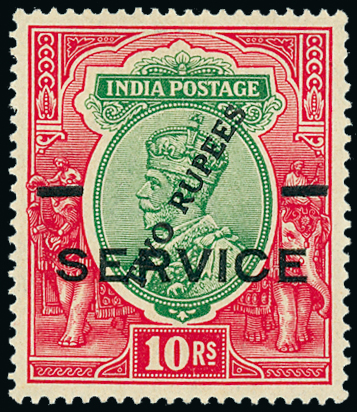 There was further evidence of the great upsurge in online live bidding at the British Empire & Foreign Countries auction held on January 22-23, pre-sale estimates sometimes left far behind as the sale soared to a total of £699,001. This auction had been postponed from December in order to allow sufficient time for viewing by collectors and dealers and this policy was rewarded by the remarkable prices achieved by collections as well as individual items.

The  main focus of this auction was on the stamps and postal history of India and its States, an extensive collection compiled by the late Ken Carter over the course of a long, remarkable life.

Results were more varied for the exceptional collection of Postal Orders formed by prominent collector Jack Harwood but it is hoped that this exposure to the global market will increase interest in a specialist area that has great potential for future growth. As expected the strongest bidding came for the New Zealand postal notes with the handsome 1894 £5 essay achieving £5,580 [lot 167].

Full listings of the prices realised from this sale may be downloaded.  Contact Tom Margalski for further information.