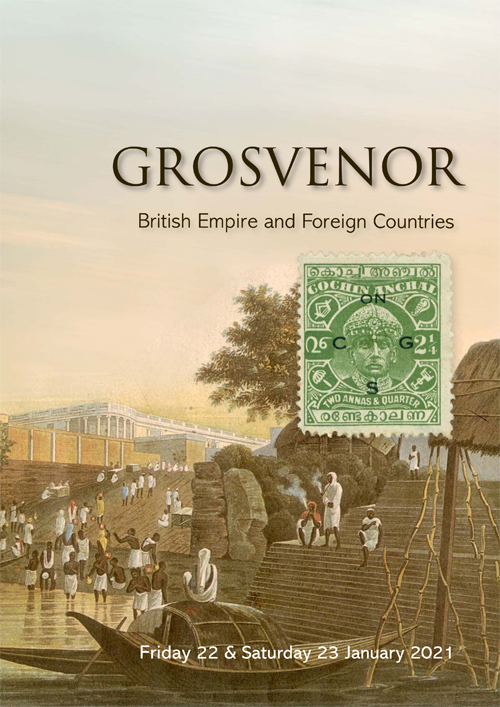 KING EDWARD VII IN DEMAND “A once in a lifetime opportunity” was how a prospective bidder described this auction held at the Grosvenor saleroom on 21st May.

This specialised Great Britain collection offered just over 360 lots of outstanding material from the reign of King Edward VII, the like of which had not been seen on the market for decades.  A strong group of collector and trade buyers assembled at … Read more...

SPRING IN THE AIR AT GROSVENOR MAY SALE –

May 7th saw the 47th auction sale at Grosvenor, Postage Stamps and Postal History of the British Empire.  Offering over 1300 los from throughout the Empire the sale commenced with a strong section of Falkland Islands and Antarctica.

This specialised section of Falkland Islands included the wonderful collections formed by Margery Wharton and Judith Faulkner and comprised a wide range of fascinating lots.  It drew a serious audience to the … Read more...

The Grosvenor November auctions, held in London between the 19th and 22nd, realised a massive total of £2,989,465 including many record prices, this together with the sale of the Apollonia collection of Rhodesian double heads sold in October, brought the autumn total to an incredible £3,340,198.

The first two days were devoted to the Specialised Great Britain auction which brought an astounding £2,045,255. Many fine properties … Read more...

The All World and specialized Great Britain auctions held by Grosvenor over four days in May 2008 realized an exceptional combined total of £2,187,567.

“Postage Stamps and Postal History of the World”, held on May 22nd/23rd was a truly international offering of exceptional groups of material from around the World. Unusual specialized collections of Foreign countries, including Poland (formed by Alan Blunt, Switzerland (formed by the late John Mitchell), as … Read more...

The three Spring auctions, held over two days on May 17th and 18th at Grosvenor’s saleroom on the Strand, achieved a remarkable total realisation of £2,138,883.The two Great Britain auctions totalled an impressive £1,191,350.

The Specialised Great Britain auction held by Grosvenor on January 25th and 26th proved to be a major event in the philatelic calendar, with 2473 lots on offer. The final total of over £1,490,000 comfortably exceeded the lower estimate of £1,229,995.

The auction started on a high note with lot 1, the balance of the David Bradley collection soaring to £21,172, and the following mixed lots continued in the same … Read more...

Falklands and Egypt on Fire

The Grosvenor British Empire & Foreign Countries auction, held on 7th and 8th December 2006 at their Strand saleroom achieved a total price of £1,043,347, well above pre-sale estimates with lots fiercely contested by a full book of bidders and a well attended room on both days.

Specially featured was the Falkland Islands and Dependencies, including the collection of the late Geoff Moir and material from the collections of the … Read more...